RIVALS PRAYING FOR A POWER CUT 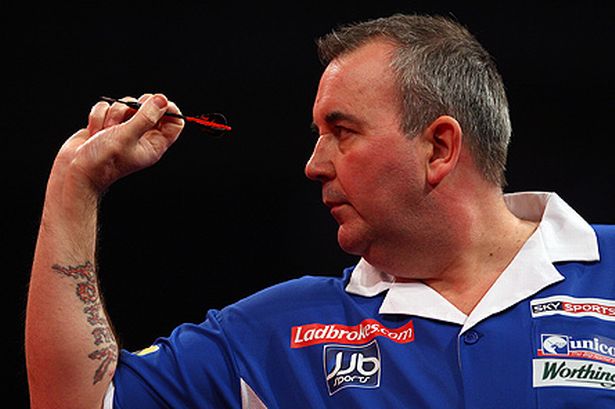 I can’t recall exactly when my love affair with darts began, but, to give you a clue, it was in the days when Britain had a coal industry and Larry Grayson was making a living out of shutting doors. Saturday afternoons meant kicking back on my Gran’s sofa with a bottle of Tizer and watching, wide-eyed, as Jocky Wilson and Eric Bristow slugged it out with a fag and a pint in one hand and cocked tungsten in the other. Great characters, great memories.

I even played in a Wednesday night league in my university days until one soul-destroying evening when my wits were pitted against a teak-tough scaffolder whose body was adorned with more ink than the residents of an entire American penitentiary. After confidently stepping up to take out double 18 for the match, my arm suddenly started shaking like a cat passing a peach seed. My first arrer lodged itself in the wall and the next two had the scorer ducking for cover. I lost the match and haven’t thrown a competitive dart since.

Despite this God-awful experience in a murky pub in Worcester, I remain truly, madly, deeply in love with the game. In fact, this has to be my favourite time of the year – a fortnight of gluttony over the festive period while watching the giants of the oche doing battle at the World Championships. It doesn’t get much better. And when I say ‘World Championships’, I mean the real one, not the bogus event masquerading as a World Championship that takes place in Frimley Green early next year. No, the real deal is at the Alexandra Palace under the auspices of the PDC, where Phil Taylor goes in search of a barely comprehensible 16th world title.

2010 looked like being yet another vintage year for The Power after he claimed the Premier League, UK Open and World Matchplay titles, but defeat in the semi final of the World Grand Prix to Adrian Lewis and a surprise early exit from the Grand Slam of Darts at the hands of a resurgent Steve Beaton at least offers hope to the chasing pack that Taylor can be toppled this year. He could face former arch rival John Part in the second round – one of few players whose legs don’t turn to jelly once he steps up to the plate against the great man. However, Part’s game is in no sort of shape to challenge this year after another tiring season of commuting to events from his home in Canada.

Taylor’s biggest challengers this year look like being last year’s runner-up Simon Whitlock, one of only a handful of players to regularly average around the hundred mark; Raymond van Barneveld who has shown glimpses of a return to form; Gary Anderson who has the ability to beat anyone on his day; and world number two James Wade who looked like Taylor’s heir-apparent during the Grand Slam until his shock capitulation in the final against Scott Waites. Former Lakeside champion Mark Webster averaged an impressive 102 during his singles matches at the recent World Cup and looks in fine touch, while Co Stompe and Adrian Lewis have both beaten Taylor in recent events, but lack the consistency to go all the way.

He might be a prohibitive favourite at 6/4 on for yet another title, but it’s difficult to recommend investing your hard-earned in anyone other than Taylor. But who will he play in the final? Gary Anderson has never performed at the World Championships, so Taylor vs Wade at 4/1 looks a decent bet.