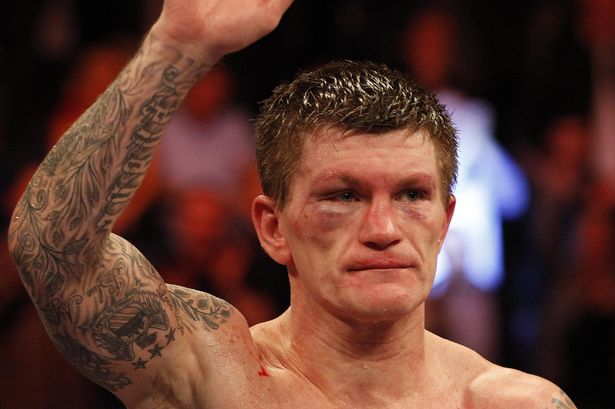 Back in 2005, just a few short months after his grueling, career-high victory over world light-welterweight champion Kostya Tszyu at his spiritual home, Manchester’s M.E.N Arena, I enjoyed a pint or ten with Ricky Hatton at a bar in Eastbourne where he’d just performed a near the knuckle stand-up routine (think Peter Kay infused with Bernard Manning) for 500 or so captivated punters. From there, a group of us were given a police escort to Kings nightclub and smuggled into a roped off VIP area, where we seamlessly switched from Guinness to rose wine. Well, it was the summer… It was without doubt one of the funniest nights of my life. Ricky was at the height of his powers and his bloke-next-door, pint with the lads’ attitude was an integral part of his appeal.

Six years later, immediately after Manchester City’s FA Cup Final triumph over Stoke at Wembley, I interviewed ardent Blues’ fan Ricky for ESPN’s post-match show, Talk of the Terrace. By now, Ricky was a couple of years into his retirement, and, predictably, had piled on some serious timber. There was more chance of the Hit-Man becoming Manchester United’s global ambassador than there was of him making the ten-stone light-welterweight limit. Unless of course you chopped off one of his legs. Actually, maybe both of them…

Much like our previous encounter, Ricky was ‘relaxed’ and ready with his repertoire of one-liners. Just before we went live to the nation I told Ricky that my first un-Paxman-like question would be along the lines of: How excited are you now that City have finally won a trophy? “Excited? I nearly fucking ejaculated!” was his response, five seconds before we went on air… Thankfully, when the cameras rolled, he delivered an answer far more suitable for a family audience.

Despite the banter, joviality and outward perception of a successful, retired sportsman, this wasn’t the same Ricky who I’d previously met. A few months earlier he’d been the subject of a seedy newspaper expose regarding his heavy boozing and occasional trips to the powder room, but there was more to his almost haunted appearance than that. This was a man who’d lost his sense of purpose. Yes, he was now training and promoting fighters, but the denouement of his career as one of Britain’s most successful boxers had seen him stretchered out of a Las Vegas ring after being laid out cold by Filipino warrior Manny Pacquiao. A points decision or late stoppage defeat in a give and take war he could have accepted, but to be knocked unconscious in the second round after being totally outboxed and outmaneuvered was tough to take. In the back of his mind he also knew that his training camp, headed by the garrulous, loathsome Floyd Mayweather Snr, had degenerated into an utter shambles (I spoke off the record with Ricky’s agent Paul Speak about the camp, and there were incidents leading up to the fight that beggared belief).

There was talk of a comeback fight in 2010, but, after training half-heartedly for a few weeks, he decided that the spark had gone. It was time to hang up the gloves.

So why, two years later, is Ricky on the verge of a sensational ring return? I’m no psychologist, but the sense of purpose and drive that was missing during his aborted comeback in 2010 and our Wembley encounter the following year, has returned. When Sky Sports announced earlier this year that they were no longer going to televise Hatton Promotions’ events, there was a feeling of betrayal. Ricky was Sky’s first ‘home-grown’ global superstar – the likes of ‘Prince’ Naseem Hamed and Chris Eubank had started their careers and been built up on terrestrial television, but the Hit-Man had crossed-over from marginalized coverage on satellite television to mainstream recognition. Sky had trousered millions of pounds from Ricky’s thrill-a-minute fights in his hometown and across the pond in the United States, but when they opted to slash their boxing budget, Hatton Promotions were a notable casualty of the cutbacks despite regularly dishing up evenly matched, high quality fights.

That sense of injustice has no doubt inspired Ricky to don the gloves once more. He’s also a stand-up guy, who wants the best for his fighters, and if that means a personal return to the hurt business in order to secure a television deal and increased revenue for his stable of fighters then that’s what he’s going to do. The rumour is that he’ll have two or three more fights before calling it a day, and that his ring return is the sweetener the TV channels need in order to sign him and his fighters up on a long term promotional deal.

I can understand why the majority of fight fans don’t want to see Ricky fight again – he’s so well liked that nobody wants to see him get hurt – but at the end of the day he has the right to follow his own path. And, if he is going to scratch this itch, then he might as well do it now at the relatively tender age of 33.

Everybody loves a comeback – seeing the Stone Roses this summer was undoubtedly one of the highlights of my life. This particular Mancunian comeback might end with Ricky flat on his back, or struggling to beat a journeyman in an eight-rounder before calling it a day once and for all. But you never know, it might just end with another unforgettable night in Las Vegas with his legions of fans singing Blue Moon as their hero ducks his head through the ropes at the MGM Grand. And, let’s be honest, who wouldn’t want to see that?