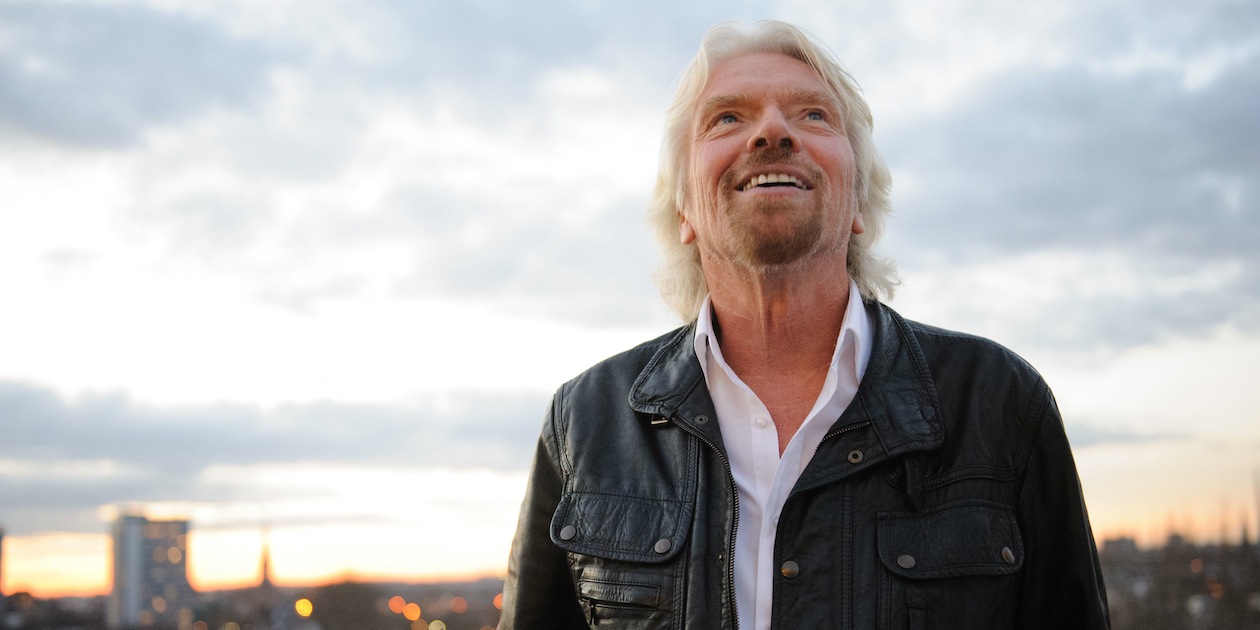 Sir Richard Branson has long championed the ethos of sustainable business and environmental responsibility. But critics of the Virgin chief believe that his altruistic image is undeserved.

Back in May 1977, snarling Sex Pistols front man Johnny Rotten and future knight of the realm Richard Branson formed an unlikely alliance when the latter’s Virgin Record company signed the musically-challenged Punk rock pioneers. At the subsequent press conference to announce the partnership, music journalists were bracing themselves for the usual mix of anarchic mayhem and colourful language that had been the Pistols’ raison d’etre since Anarchy In The UK entered the charts a year or so earlier. However, it was Branson’s bizarre behaviour that hogged all the attention; continually groping Rotten’s derrier until, finally, the rather miffed ‘crooner’ yelled out to the story-hungry scribes, “never trust a hippie”! There are plenty of Branson detractors who’ll say that Rotten (or John Lydon as we know him now he’s mellowed) was onto something with this particular observation.

Signing the Sex Pistols to his fledgling record label was typical of a man who set sail on his memorable voyage into the business world as a self-confessed barefooted hippie with “a bit of flair for publicity and self promotion”. Joining forces with the most controversial band of all time and touching up their odious lead singer in front of a rampant press pack was a sure fire way to hog the headlines.

This knack for self promotion had been evident a decade earlier when the dyslexic 16-year-old dropped out of school to launch his first venture, the youth culture magazine, Student. On his blog on the Virgin website, Branson recalled how he conned journalists from national newspapers into talking about  the publication.

“We developed a foolproof way of impressing them,” he said.

“I sat at my desk, the telephone at my elbow. ‘Great to meet you. Take a seat,’ I would say, waving the journalist down into the beanbag opposite me. As they shuffled around trying to retain their dignity, get comfortable, and remove the drips of houmous and piles of cigarette ash from the folds, the telephone would ring.

“Can someone take that, please?’ I would ask. ‘Now, what do you want to know about Student?’ I’d ask the journalist.

“It’s Ted Heath for you, Richard,’” Tony would call across. “I’ll call him back,’” I’d say over my shoulder. ‘Now, what did you want to know about Student?’ Then the telephone would ring again, and Tony would pick it up. ‘I’m sorry to interrupt,’ Tony would apologise, ‘but it’s Mick Jagger for you and he says  it’s urgent.’

“Please excuse me for a minute,’” I’d say, reluctantly picking up the phone. ‘Mick, hello. Fine thanks, and you? Really? An exclusive? Yes, that sounds great’ And on I went until Jonny couldn’t stop laughing in the call box opposite or the pips went.

“I’m sorry,’” I’d say to the journalist. ‘Something’s cropped up and we’ve got to dash. Are  we finished?’

“The journalist would be ushered out in a daze, passing Jonny on the way, and the telephone would stop ringing. Journalists swallowed  our scam hook, line  and sinker.”

It’s fair to say that Branson – who was told by his headmaster upon leaving school that he would either end up in prison or a millionaire – has come a long way since this wickedly clever deception. But is he a stellar example of a brilliant, maverick businessman, or is he merely a publicity-hungry chancer who keeps getting away with it?

By the age of 23, Branson had made his first million after the mail order record selling business he created in 1970 morphed into a fully fledged store, then a recording studio, and finally Virgin Records.

A myriad of high profile and successful ventures have followed, but there have been a number of projects that have either failed to get off the ground despite much fanfare and lavish media attention, and others that have been downright failures. Virgin Cola anyone?

Yet Branson’s status and popularity among the public remains undiminished. His environmental initiatives; books like Screw Business As Usual and buying his own paradise island have made him a hugely popular figure – certainly among aspirational Brits.

But is this elevated status deserved? There are plenty of journalists and business writers who have studied Branson who believe that it’s a case of style over substance; that’s he’s a mass of contradiction. He talks lovingly about nurturing the environment and the responsibility those with extreme wealth must shoulder to facilitate this, but then happily jumps aboard an almost empty private jet to attend climate change conferences. He talks about responsible business practices, but lives on an island where he’s virtually exempt from paying taxes. He’s a salesman and leader who’s eschewed the suit and tie and broken all the rules, but is he a radical visionary or does he keep getting lucky?

Respected journalist Tom Bower, who’s written a brace of scathing biographies of the man, believes that Branson is a  tax-dodging charlatan  whose altriustic image is a  complete phony.

However, Branson’s supporters are a loyal bunch who have nothing but faith in the blonde-locked swashbuckler. Within hours of the fatal Virgin Galactic test flight crash in October last year, Piers Morgan tweeted that he would still happily jump aboard the company’s planned first commercial spaceflight later this year. Mind you, there’d be plenty of people encouraging Morgan to do just that – but without a seatbelt, life-raft  or parachute.

Anyone I’ve ever spoken to who’s worked for Branson has nothing but good things to say about the man. These include a former girlfriend, a Virgin Atlantic air stewardess, who once won a trip to Branson’s Necker Island for one of his infamously hedonistic company parties. Judging by the boss’s reputation for being a ladies’ man, I can only… In fact, let’s not go there.
Branson affords his airline staff massively discounted travel for their family and friends, which meant that I was able to globe-trot across the world – sometimes in Upper Class – for the princely sum of £80 a trip.  It’s fair to say that holidays to Cape Town, San Francisco and Las Vegas squirted enough superglue on the relationship to hold it together when it was well past its sell-by date. Mind you, Branson has always been a champion of sustainability…

In 2011, Branson seemed to reach something of a crossroads, denouncing raw capitalism in favour of green projects (the cynics insisted his ‘new way’ was a face-saving exercise to mask the enormous losses Virgin had incurred during the global financial crisis).

“Business as usual is wrecking the planet,” he said. “Resources are being used up: the air, the sea, the land are heavily polluted. The poor are getting poorer, many are dying of starvation or because they can’t afford a dollar a day for life-saving medication.  We have to fix it – fast.”

In 2012, Branson and the former chief executive of Puma and current director of luxury good company Kering, Jochen Zeitz, launched global not-for-profit organisation The B Team, to encourage businesses to move away from focusing on immediate profit, and instead look at where and how it invests and operates for the long term good of people and the environment.

Last January Branson gave Forbes magazine an insight into his motivation, saying: “I made all the money I need in my lifetime and there are quite a lot of problems in the world.

“Up until now businesses have thought of themselves as businesses – there to worry about the bottom line and create jobs, but they’ve been frightened about speaking up about issues. What we hope for with the B Team is for them to be a lot braver. If we see that women’s rights are not being protected in certain countries, we will speak out about it. If we feel that the rights of individuals who love each other but are of the same sex but not being protected we will speak out about it. And we will do our best to use the influence we have to try to get some sense and try to change opinions.

“Business people do have influence in this world and it’s very important that they use that influence to protect basic human rights which are very clearly stated in the human rights charter but are not adhered to in  many countries.

The B Team project is just one example of how Branson has apparently changed from being a profit-seeker continually looking at the next start-up venture, to being focused on philanthropy and social change.

The Virgin Group’s non-profit foundation, Virgin Unite, has also launched several pioneering initiatives across the globe in the last decade.

All very noble projects, and, with Branson’s uncanny knack for self promotion, they’ve succeeded in raising his already high profile as one of the world’s leading green entrepreneurs.

But Branson’s nemesis, the author Tom Bower, believes that several layers of promotional paint should be stripped away from ‘Mr Green’. In his book Branson: Behind The Mask, he wrote:

“His few cynics were silenced by the favourable publicity surrounding the US$25m Earth Challenge. Few seemed to be aware that no winner had been named and that the prize remained unpaid. Among the hundreds of disappointed applicants was James Lovelock. Lovelock proposed laying pipes across the surface of the oceans to suck carbon dioxide into the sea. ‘Richard has been in touch with Jim Lovelock about this idea,’ said a Virgin spokesman, ‘and is very interested. We are looking into it to see if we can fund a trial.’ Nothing happened but, at no cost, Branson’s image was enhanced.”

And Bower isn’t the only cynic. Two years on from the launch of The B Team, there are rumblings from environmental experts that the organisation has achieved next to nothing – that it’s more focused on PR spin and press releases than measurable action.

Sustainable business blogger Jo Confino wrote in the UK’s Guardian newspaper in August last year: “At the time of the B Team’s launch, I wrote that the corporate sustainability movement may be entering a new dynamic phase because it aligned influential business leaders running major corporations with political influencers such as Nigerian finance minister Ngozi Okonjo-Iweala and Gro Harlem Brundtland, the former Norwegian prime minister. I hope I didn’t call it wrong.

“Several people involved in the initiative have expressed concern that the lack of traction is the result of ‘big egos’ among the business leaders, which have got in the way of agreeing on collective action. Getting them all together in the same room has also been difficult, given their hectic schedules. Another worry has been a lack of funding. The B Team has been getting by with just a handful of staff but you simply cannot build a global movement with so few resources.

“The B Team still has great potential to be a force for good. Business leaders need to invest their time and energy. What we don’t need are more press releases; what we do need is for these leaders to collectively take to the world stage, bang their fists on the table to make their demands known. Time is running short and everyone needs to step up their game.”

Time is certainly running short for Branson, a man approaching his 65th birthday later this year. As he enters the final few chapters of his extraordinary life, will he succeed in achieving positive change to global business practices and help to alter the course of our ticking environmental time-bomb? Tom Bower may argue that such noble deeds are just a smokescreen, created by a man more interested in garnering a few more  column inches to enhance his  glowing reputation.

One thing’s for sure, he’ll continue to polarise opinion.