AN AFRICAN CARRY ON 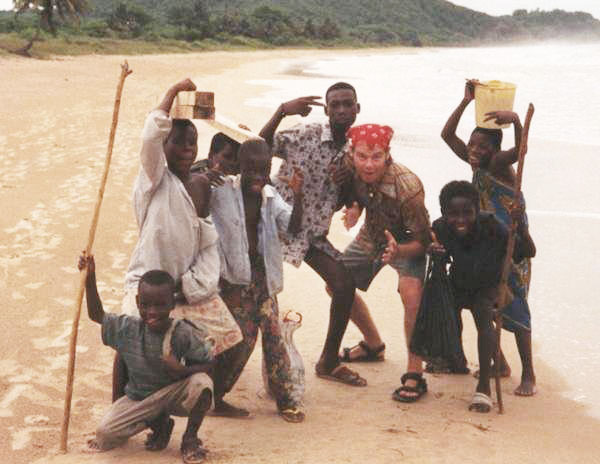 How I landed my big break in television

It’s April 2002. I’m hitchhiking from Teshie-Nungua on the coast of Accra in Ghana to the border of Togo on a desolate, dusty road, and it’s hotter than Halle Berry in a pair of killer heels at a chilli-eating contest. The rusty wheels of our rickety old pick-up truck are embracing each and every pothole as though they’re long lost friends; I feel like I’m being burned alive in a giant tumble dryer.

Then, without warning… bang! We’ve hit something. The stunned silence is broken by a blood-curdling yelp from an emaciated cow; it’s obvious that her injuries are terminal. The driver leaps out of his truck; my immediate thought is that he’s ready to put the poor animal out of its misery. But no. Instead of reading the last rites to our victim and reaching for the nearest shovel, the driver wanders to the side of the road, takes off his trousers and moves his bowels in plain sight of his eight rather shaken passengers. Clearly his thought process was, “Well, I’ve had to stop, I may as well make the most of it.” Strange things happen in Africa.

Within a few weeks of arriving in Ghana to work for a British-based charity, I’d embraced everything African; I was wearing beads, bracelets and bandanas, and listening to Toto records at any given opportunity. I even contemplated having my hair braided, until one of my more sensible pals pointed out that I’d look positively ridiculous rocking up to my newspaper office with a head full of dodgy cornrows when I returned to the UK in a couple of months’ time.

It was during my three-month odyssey around this incredible continent that I landed my first break in television. I’d always fancied giving TV a go, so when I heard that a high-powered executive from Ghana’s main station with a reputation for being a ladies’ man drank at a local watering hole, I thought I’d pop down and have a word in his ear. I came up with a cunning plan, one that owed much to the Carry On films of the 1970s.

After buying him a drink we arranged to meet the following day at the TV studio. Preying on his obvious penchant for anything female that drew breath, I persuaded a well-built lady-friend of mine to accompany me to the meeting wearing a low-cut top that left little to the imagination and a skirt that was so short it would have been too small for an in-drag Verne Troyer.

As TV man almost literally began dribbling, I popped the question: “As an experienced television presenter [enormous lie], I really want to give something back to the African people [pretty big lie]. I’d like to offer my services on your TV station.”

“You can start tomorrow night if you like. Champions League final, Real Madrid versus Bayer Leverkusen; you’re the main pundit,” he replied, without once removing his eyes from my friend’s ample cleavage.

My television career was born; it really was that simple. From there, I auditioned on a rival TV station that was broadcasting the 2002 World Cup. I was one of six hopefuls asked to attend a full day of rehearsals 24 hours before the tournament kicked off. Of the six who were invited, I was the only one who bothered to show. I essentially bagged a month-long gig on TV by turning up and being prepared.

And talking of being prepared… The nadir of my broadcasting career thus far materialised after a group stage match between England and Nigeria that ended in a dismal goalless draw. The plan was to show Argentina versus Sweden immediately afterwards, but technical problems in the studio meant that the presenter and I had to fill air-time.

Initially, we thought it would just be for a couple of minutes, but, alas, the technical issues proved rather problematic. After 25 minutes of sterile chat, Chris the presenter clutched his chest in obvious pain. My first reaction was that he was about to have a heart attack live on air. “Control room, I have a problem!” he screeched, with a haunted grimace on his face. It was only then that I looked down and noticed… We’d been on air for so long without an advert break that he’d wet himself. His dry-clean-only purple slacks were beyond salvation.

The next time I’m presenting at our new, custom-built, incredibly expensive studio here in Singapore, all I ask is that I avoid any bouts of on-air incontinence.